On this page, you’ll find all kinds of content for your classroom–lesson and unit plans, classroom activities, and videos. You can use the drop-down fields on the right side of the page to search for content by type, content, and grade level. You’ll also find two instructional tools developed by STEMSTL’s workgroups: the professional-development-quality rubric is designed to help professional-development providers self-assess the quality of their programs, and the transportable skills document defines and provides examples of the most in-demand professional competencies.

We continue to update our listings as program providers develop new content, so visit us often! Can’t find what you need here? Let us know! Want your STEM program’s information listed on the site? Submit your information here.

STEMSTL’s Pathways to Workforce workgroup developed the Transportable Skills document to connect K-12 educators with the 21st-century skills employers have identified as a need for their workforce. 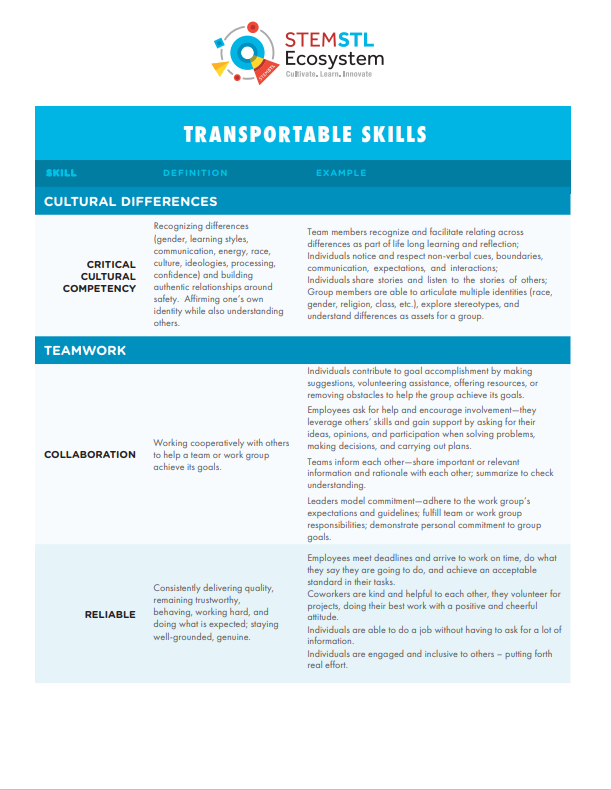 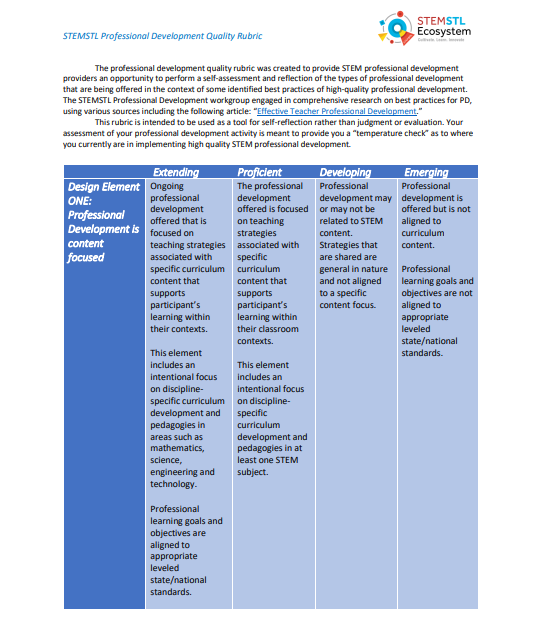 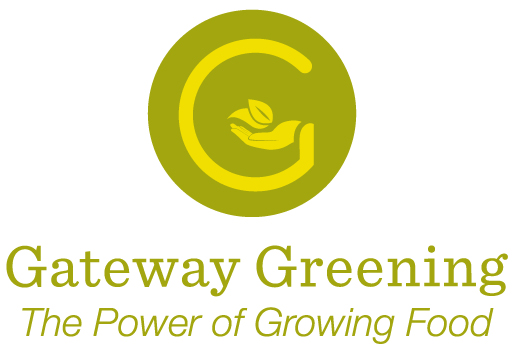 Turn your school garden into a living laboratory with the Seed to STEM curriculum. The lessons emphasize exploration, inquiry, and discussion to access the scientific wonder of the garden. Kindergarteners to fifth-graders will reinforce Next Generation Science Standards and build a stronger connection to their community, environment, and food system. To access the unit plan, visit www.gatewaygreening.org/seed-to-stem/

We excite and inspire kids with the knowledge and tools to lead healthier lives. HealthWorks! Kids’ Museum St. Louis came into existence as a result of efforts to expand The Delta Dental Health Theatre to address broader, overall health issues after Delta Dental of Missouri became a major corporate sponsor in 2004. Those plans evolved and grew more ambitious over the next several years, ultimately leading to the closure of the original theatre on Laclede’s Landing in downtown St. Louis after 38 years so it could be housed in the new, dramatically expanded museum. The Delta Dental Health Theatre was originally organized as a program under the Foundation of the Greater St. Louis Dental Society in 1977 by a group of innovative and remarkable dentists including, Dr. Roy Wolff, Dr. Russell W. Buchert, Dr. Joseph M. Grana, Dr. Roger Parrott, and Mrs. Joanne Parrott. In 2002, it was incorporated as an independent 501(c) (3) not-for-profit organization. The HealthWorks! Virtual Classroom is a collection of resources including lessons, activities, worksheets, books, and games available to classes and families separated by grade and subject.

Fishing is a great way for everyone to have fun outdoors, learn about conservation, and make happy memories together. Our Discover Nature Fishing Program helps Missourians gain the skills and confidence to go fishing on their own.

Missouri's hunter education course is required for any hunter born on or after Jan. 1, 1967. Learn what the course covers and where to take it, including an online option for the knowledge portion.
Page 1 of 4 1 2 3 4